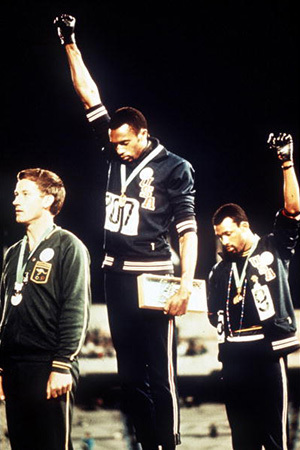 U.S. Olympian John Carlos, whose black-gloved protest at the 1968 Olympic Games in Mexico City stands among the most iconic moments in sports history, will participate in three events at the University of Notre Dame from April 4 to 7.

As part of a community-wide initiative called “1968: A Movement in Time,” Carlos will meet and greet members of the campus and broader communities from 6 to 7 p.m. April 4 (Wednesday) at Notre Dame’s Center for Arts and Culture, 1045 W. Washington St., South Bend. He also will speak in a private event April 5 (Thursday) for Notre Dame staff members from 9:30 to 10:30 a.m. and 2:30 to 3:30 p.m. in Washington Hall as part of the University’s Staff Diversity Speaker Series.

The Black Man’s Think Tank, sponsored by the Notre Dame’s men’s group The Wabruda, will feature a talk by Carlos on April 7 (Saturday) in the Dahnke Ballroom in the Duncan Student Center on campus. The event will take place from 10 a.m. to 2 p.m., with Carlos serving as the keynote speaker after lunch. Participants can register here.

The Mexico City Olympics took place in the fall of 1968, during a time of significant unrest in the United States related to civil rights and the Vietnam War, in particular.

A member the U.S. track and field team, Carlos earned a bronze medal in the 200-meter sprint behind teammate Tommie Smith in first and Australian silver medalist Peter Norman.

During the awards ceremony, Carlos and Smith stood on the podium, lowered their heads and raised black-gloved fists during the playing of the American national anthem in a silent effort to further the civil rights movement in the U.S. They each also wore black socks without shoes to protest poverty and beads and a scarf to protest lynchings. Norman supported them by wearing a patch on his national team jacket bearing the words “Olympic Project for Human Rights.”

Carlos and Smith were suspended from the U.S. team and banished from the Olympic Village, and they faced death threats and general condemnation after their return from Mexico City.

Carlos tied the world record of 9.1 seconds in the 100-yard sprint in 1969 and went on to briefly play professional football. He gradually re-engaged with the U.S. Olympic Committee and served on the organizing committee for the 1984 Olympic Games in Los Angeles. For many years he has served as a counselor and track and field coach at Palm Springs (California) High School and delivered motivational speeches and participated in other activities in support of humanitarian causes.

Carlos collaborated with author Dave Zirin on “The John Carlos Story: The Sports Moment that Changed the World,” and he and Smith were honored in 2008 by ESPN with the Arthur Ashe Courage Award.

Originally published by Dennis Brown at news.nd.edu on March 26, 2018.