Natalie Johnson, a defensive specialist on the University of Notre Dame women’s volleyball team, sat comfortably on the hardwood floor with a group of kids gathered around in a half-circle, quiet but anxious to run and play.

It was about 10 a.m. on a chilly Saturday, and Johnson and two other Notre Dame athletes were talking with the kids about “Keeping Your Cool” as part of Pass It On, a pilot leadership program for third- and fourth-grade students at Perley Primary Fine Arts Academy in South Bend.

Lesson one: Take a deep breath.

“It just kind of slows your mind down a little bit,” Johnson said, demonstrating the technique in a corner of the gymnasium. She turned to one of the kids. “Can I see your ‘basketball breath’?”

Taking turns, the kids took deep breaths, competing to see who could exhale the longest.

Developed by Student Welfare and Development, a division of Notre Dame Athletics, Pass It On uses basketball to teach kids about leadership in collaboration with the South Bend Community School Corp.

The curriculum, based on principles of respect, kindness, honesty and hard work, draws from Student Welfare and Development’s Rosenthal Leadership Academy, which aims to develop and enhance strong leadership on University sports teams with progressive annual programming for emerging and existing leaders.

“Ok,” Johnson said when they were finished. “Let’s recap. What did we learn about keeping your cool?”

“Take a deep breath,” said another.

“Walk around,” said a third.

Afterward, the athletes, some of them veterans of the Rosenthal program, signed the kids’ “passport books,” indicating that they had completed the lesson. Then they moved onto drills — shooting, dribbling, passing, agility.

The third- and fourth-graders — divided into blue, gold, green and gray teams and paired with two to three student-athletes each — moved from station to station, shooting jumpers, weaving around bright orange cones, practicing bounce passes. 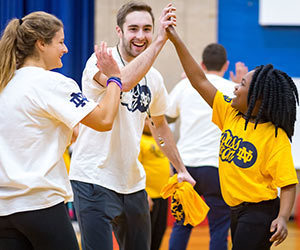 The circa 1950s gymnasium, normally quiet on weekends, buzzed with activity. Balls bounced and echoed off the hard walls. Kids laughed and shouted. Whistles sounded. Sneakers squeaked on the clean, freshly dusted floor.

“It’s been awesome being able to give these young kids leadership advice, being able to help them reach their highest potential in sports and mentally,” said Johnson, a senior information technology management major from Pasadena, California.

Joe Somers, principal at Perley, said, “It’s a wonderful opportunity for our students to begin learning the foundations of athletics: to win with pride, to lose with dignity. Those fundamental skills sometimes get forgotten when we play the games.”

At the same time, teachers and administrators get to engage with the students outside of the classroom, Somers said.

Situated south of campus in the rapidly redeveloping Northeast Neighborhood, Perley offers an arts-integrated curriculum that celebrates cultural awareness and diversity to a diverse group of students in grades kindergarten through fourth grade.

Based on its proximity to campus, the school enjoys a special relationship with the University, including with Student Welfare and Development. The office frequently collaborates with the school corporation on special initiatives and programming there, including a past mural project and an ongoing mentorship program.

As such, it was “a great fit for us to launch our pilot program,” said Joe Sibley, program coordinator for Student Welfare and Development.

Modeled on a traditional basketball clinic, the five-week program took place over four Saturdays in January and February. In addition to “Keeping Your Cool,” themes included “Everyone Has a Role,” “Loving the Process,” “My Best Self” and “Team Over Me.” One Saturday was canceled due to weather.

“Leadership development is one of the main things we focus on in Student Welfare and Development,” said Sibley, so it made sense to “take the leadership skills (the athletes were) learning here and bring them to others in the community.”

About three dozen kids and 20 student-athletes — representing women’s volleyball, rowing and swimming, men’s and women’s soccer, track and cross-country, and men’s golf — participated in the pilot program, which was open to all third- and fourth-graders at Perley.

Bruce Thompson, 10, arrived early each Saturday to help open the gym and stayed late to help lock up.

“He usually beats me here to school because he walks here, he’s so excited,” Somers said. “So I allow him to help me lock the doors and secure the building and turn on the lights and get things ready, and he loves it. It empowers him to be part of the setup, and he’s eager, he’s happy.”

Parents love it too, Somers said.

“Not one parent said this was terrible,” he said. “They like the idea.”

“From what I have seen, it seems to be very beneficial,” said Ellise Moore, mother of 9-year-old Trent Horton. “He’s learned about sportsmanship,” she said of Trent, “and different ways to be effective on a team.” 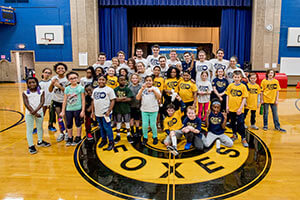 Asked what he learned, Bruce said, “Always support your team no matter what.”

“We were thrilled to team up with Notre Dame for the Pass It On program,” Jones said. “Our students had the opportunity to learn, develop and apply leadership qualities to their daily lives through this basketball clinic.”

Back in the gym, the kids helped gather the loose balls and pick up the cones after the drills, running, dancing, tumbling, mugging, laughing and joking along the way.

Next, they competed in several half-court games, then huddled to review the day’s lesson before ending with a healthy snack of granola bars, bananas and apples. Meijer donated the food. Saint Joseph Health System donated water bottles.

Student Welfare and Development will evaluate the program in the weeks ahead. The hope is to expand it to other schools in the future.

“It would be my intention to advocate for a program like this to be put into all of our South Bend schools,” he said. “It has such a positive impact on our children.”

Originally published by Erin Blasko at news.nd.edu on March 01, 2018.