Area youth, including students from the University of Notre Dame Robinson Community Learning Center, took to the ice recently as part of the Little Blackhawks Learn to Play program, a legacy of the NHL Winter Classic at Notre Dame Stadium that saw the Chicago Blackhawks take on the Boston Bruins on New Year’s Day.

“It’s important that they know that everyone falls down. We actually tell them that, as coaches, we fall down,” said Michael McNeill, programming and instruction manager at Compton. “We like to say, ‘If you’re not falling down, you’re not trying.’ Then it’s ‘How do you get up? How do you get up quick?’”

The kids, nearly indistinguishable under so much gear, alternately stumbled and glided across the ice, sticks outstretched for balance. Some fell, but then quickly recovered, their moms and dads looking on.

Jennifer Pittman, of South Bend, watched from the concourse as her daughter, Karis Ivory, 8, practiced turns below.

“We’ve been ice skating a few times, and she really loved the ice,” Pittman said of Karis, a student at Nuner Fine Arts Academy as well as the Robinson Center, an off-campus educational initiative of Notre Dame serving the Northeast Neighborhood south of campus. 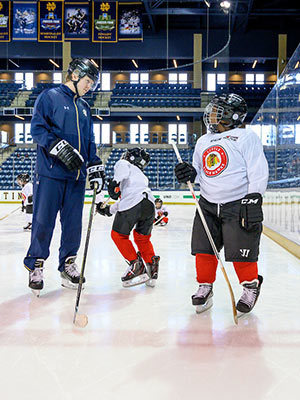 “We asked her if she wanted to try figure skating,” she said, “and she said no.”

Of the Little Blackhawks program, Pittman said, “The opportunity and the exposure is priceless.”

Developed by the NHL in collaboration with the NHL Players’ Association, USA Hockey and Hockey Canada, the Learn to Play initiative seeks to inspire more families to join the hockey community.

The program offers head-to-toe equipment, age-appropriate instruction and certified coaching to first-time players in a fun and safe atmosphere — in this case, the state-of-the-art home of the Notre Dame men’s hockey team.

“We’re teaching the kids about hockey, of course, but a lot of it is just being on the ice,” McNeill said.

And part of a team.

“We talk about how important it is to be a good teammate and what that means: Helping each other out on the ice, rooting for each other, getting excited for your teammates,” McNeill said.

At the same time, McNeill said, “It’s an opportunity for us, as coaches and as people who are interested in youth hockey in our area, to continue to grow the game and get more kids involved in it.”

The RCLC has a long relationship with the Blackhawks. The team visited the center in 2013 while training at Compton ahead of the 2013-14 season. During the visit, Chicago Blackhawks President and CEO John McDonough offered to host the students for a game at the United Center, including transportation, tickets and dinner.

“After that, we just kept up the relationship with them,” said Jennifer Knapp Beudert, manager of the RCLC.

Among other things, the team, which returned to Notre Dame for training camp in 2014, 2015 and 2017, gave 200 tickets to the RCLC for the Winter Classic, Knapp Beudert said, and featured the center on the video board during the sold-out game.

The team also donated $100,000 to the RCLC in partnership with the NHL, with the money going toward the redevelopment of the center and to increase youth access to hockey in South Bend as a legacy of the Winter Classic.

In addition to street hockey equipment for 30 youth, the team announced five “scholarships” for RCLC students covering the full cost of the Little Blackhawks program.

“It’s a chance for (the students) to do something they probably wouldn’t get to do otherwise,” Knapp Beudert said of the scholarships, which went this year to three boys and two girls, including Karis. “And everything is free — the equipment, the skates, everything.”

The Thursday class was added due to overwhelming demand.

“Quite honestly, it was a Tuesday night program, and we had such a positive response that, instead of putting kids on a waitlist, we worked with the Blackhawks to add a Thursday session,” McNeill said. 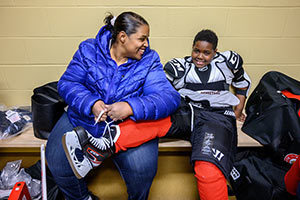 The program costs $125. That includes instruction as well as the equipment, which the students get to keep. The gear alone, including branded Blackhawks bags with the players’ names on them, is valued at several hundred dollars or more.

“Our goal is to increase awareness of and participation in hockey, and the Little Blackhawks program is a wonderful resource to introduce the sport to those who have not played,” said Annie Camins, senior director of fan development for the Blackhawks. “In just three years, we’ve been able to offer affordable instruction as well as free head-to-toe gear to more than 3,500 kids, and we are thrilled to be able to extend that to the South Bend community as part of the NHL Winter Classic and Legacy Project.”

Nichole O’Hara, of Elkhart, heard about the program from a friend. Her daughter, Samantha, 7, is a student at Mishawaka Catholic in Mishawaka.

“She wanted to try a new sport, and one of her friends at school plays hockey and she wanted to play too,” O’Hara, a 2002 graduate of Notre Dame, said while watching Samantha from the stands.

Cost-wise, O’Hara said, the program is “a really good deal.”

“I think it’s awesome,” Elek said while searching for his son, Luke, 7, among the dozens of kids zooming around the ice. “They had everything ready, the gear and all that.”

The Blackhawks have committed to the program, including the scholarships for the RCLC students, for at least two years, through 2020.

McNeill hopes that is just the start.

“It’s definitely something we would want to consider continuing,” he said of the program, which he describes as a “great next step” to the already popular learn-to-skate classes at Compton. “And based on the response, I think that’s a real possibility.”

Originally published by Erin Blasko at news.nd.edu on May 14, 2019.