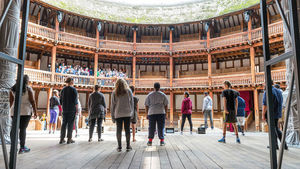 Fourteen RSC youth, ages 12 to 18, traveled to the country with three RCLC staff and four AmeriCorps members from July 26 to Aug. 2 to study and perform Shakespeare in Stratford-Upon-Avon and London at the invitation of the Shakespeare Birthplace Trust and Globe Theatre, respectively.

The youth — all South Bend area students — performed Shakespeare’s “Cymbeline” in the Great Garden of Shakespeare’s New Place; toured the Globe Theatre; took a movement workshop on the stage of the Globe; led a workshop with Globe staff about engaging diverse youth with Shakespeare; and attended four professional Shakespeare productions.

The celebration will feature a performance of a scene from “Cymbeline,” presentations by RSC youth and two videos — an 8-minute documentary about the trip produced by Notre Dame Magazine and an accompanying “What Would You Fight For?” segment that debuted during the Notre Dame vs. Temple University game.

In addition, Canon will present a book of trip photos — captured by the youth with cameras loaned to them by the company — to RSC members, families and supporters.

Founded in 2008, the Robinson Shakespeare Company offers high-quality theater instruction to South Bend area youth from diverse backgrounds. Members compete in the Shakespeare at Notre Dame English Speaking Union Monologue Competition in the fall and perform full productions of Shakespeare’s works in the spring and at the end of a five-week Shakespeare Summer Camp.

The company also does outreach into area schools, reaching hundreds of students through weekly after-school programs and in-class workshops.

Originally published by Erin Blasko at news.nd.edu on October 24, 2017.