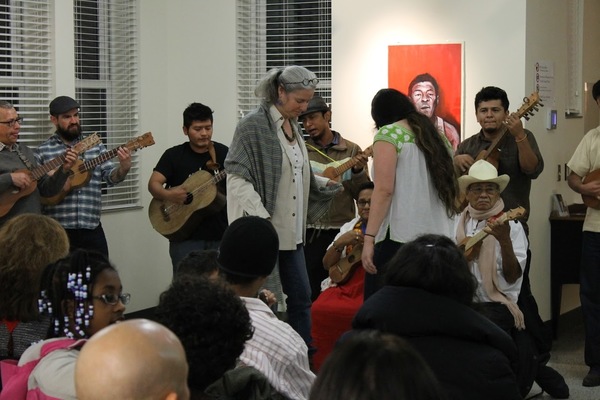 Friday March 27, Colectivo Alteppee, a musical group from Southern Veracruz, Mexico gave a fandango performance and presentation at the Notre Dame Center for Arts & Culture (NDCAC). The group specializes in the traditional string music of Southern Veracruz, known as son jarocho.  They are also dedicated to arts education, and have traveled throughout the United States, Mexico, and Guatemala teaching university audiences and cultural institutions about this unique form of musical expression.

Colectivo Alteppee has released album recordings and a documentary film, and they have been involved in building transnational son jarocho communities in the United States. They also make and repair instruments, teach music and dance, contribute to traditional community celebrations, and promote artisan projects.

The fandango is a social gathering centered around music and dance, where communities come together to share and celebrate. The event was free and open to the public, offering a great way for the community to unite and celebrate this culture.

The fandango concert took place after a week of events at Notre Dame and the NDCAC organized by Dr. Alex E. Chavez, Assistant Professor in the Department of Anthropology and Faculty Fellow of the Institute for Latino Studies. Colectivo Altepee visited Dr. Chavez’s Anthropology and Latino Studies courses, where they explained son jarocho’s historical context, and its presence within the United States. The group also installed a photographic exhibit showing images of Veracruz musicians and communities at the NDCAC. The exhibit is open through June 2015. On March 24 and 26, Colectivo Altepee worked with youth as a part of the NDCAC’s after school program. And on March 25th, there was a film-screening of “Ayer, Hoy y Mañana: Música Traditional de Cuerdas” (Yesterday, Today, Tomorrow: Traditional String Music), a film by Simón Sedillo screened at the Eck Center Auditorium, accompanied by a talk led by Colectivo Altepee. The film documents how Colectivo Altepee has utilized their traditional music as a tool for social transformation amid the current tumultuous political climate in Mexico.