As a part of a one credit, community based learning course offered through the Center for Social Concerns (CSC) over the summer, 54 Notre Dame Football players spent mornings in the classroom discussing texts on ethics, and then afternoons interacting with participants of local area organizations. 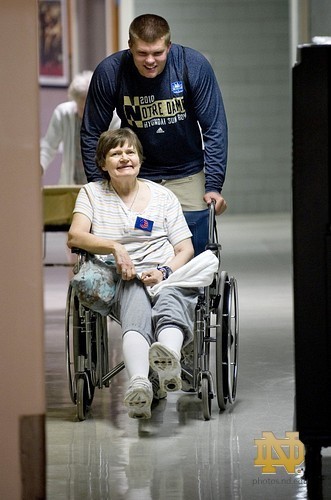 “Our refugee children looked forward to these days with the players. But the appreciation was for the person, not for the name.  These kids had never heard of American football or Notre Dame before!” says Esther van Stam, casework coordinator at the American Red Cross.

“The football players in turn told me they learned a lot about refugees…some stereotypes were broken down. Some of our clients had a prejudice against African Americans, and some of the players in turn had certain ideas about Muslims and Arabs. This was a good opportunity to see a person instead of a label,” van Stam adds.

Notre Dame student athlete Brandon Newman was paired with a young Iraqi boy at the Red Cross. “At first I found the Iraqi children in the program to be loud, boisterous, and physical. However I learned that this was just a cultural aspect that does not necessarily result in the violence Americans see on TV.” Newman enjoyed building trust with "Zaid," later realizing that the young Iraqi boy had only recently arrived in the US with his grandmother.  "As long as I am in South Bend, I want to be a part of his life," says Newman.

Bill Purcell ’86, ’92 M.Div., and Mike Hebbeler, both of the Center for Social Concerns, designed the course to include various ethical frameworks—personal, professional, sexual and global. A key part of the course involved student reflection on the ethical decision-making they observed during their field work.

The students spent afternoons at the Robinson Center, the Center for the Homeless, the Red Cross, La Casa de Amistad, Healthwin, Perley Primary Center and at South Bend’s Logan Center.

“We want students to look internally at their own ethics, and then explore how ethics affect vulnerable populations right here in South Bend,” says Purcell, co-instructor and associate director at the CSC.

During the course, guest speakers spoke on topics such as vocation, community and professional ethics.  Co-instructor  Mike Hebbeler highlighted a talk by former Irish football player, Oscar McBride ’94.  The students were especially moved to hear how McBride struggled with his identity off the field in 2008, after many years in the NFL.

McBride, who now works for the Fit For Life Youth Foundation, dared players to think in a new way about their futures apart from football, “You go down with a career-ending injury today…what are you going to do?”

These young and healthy students were placed in wheelchairs and “given” a disability (a stroke with limited use of their left side, for example).  The players slowly climbed ramps and ambled around the grounds to learn how tiring wheelchair transportation can be. Healthwin staff also explained the various diets and the difficulty many residents have swallowing. The student athletes were then fitted for glasses that showed how tunnel and blurred vision occur with age.  The students played games using the specialty glasses, and found how difficult it was to throw or catch a ball.

Karen Martindale, an administrator at Healthwin, described the delight and anticipation of residents as they watched out the windows each day for students’ arrival.  One elderly resident took extra time getting ready for the arrival of her assigned student. “It was nice to get dressed and ready—especially to have a young man calling!” she said.