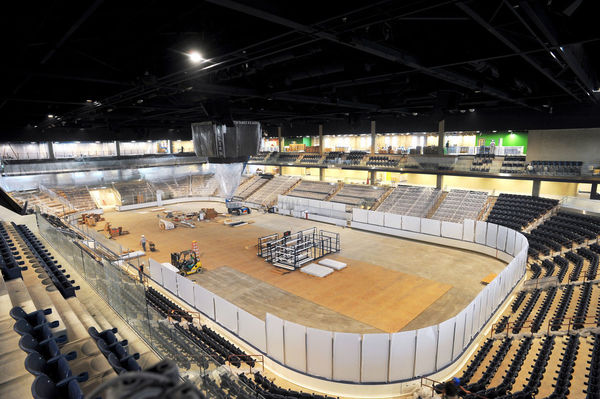 The Compton Family Ice Arena, scheduled to open in mid-October, is designed to meet the needs of the nationally ranked Irish hockey team and the local community.

Says Tom Nevala, senior associate athletics director, “The two-rink ice facility located on the southern edge of campus was designed to help meet the needs not only of the campus and of Notre Dame’s hockey team, but also the needs of the local and regional communities,”

When conversations began regarding the construction of a new ice rink to accommodate Notre Dame’s flourishing hockey program, Jack Swarbrick, director of athletics, had an idea: Why not build a facility with two ice rinks?

Without the proper infrastructure to support community use of the ice rink at the Joyce Center, for example, South Bend area youth hockey families have had to commute around the Midwest for the majority of their travel league contests through the years.  The amenities available at the Compton Arena, including a second, Olympic-sized rink will enable the University to change that and then some.

"There's a limit to how much the community can use our dormitories and our classrooms and our laboratories,” says Swarbrick, “but the athletic facilities can be a special point of contact.”

The new facility’s main arena will feature the Charles W. “Lefty” Smith Jr. Rink, in honor of the first coach in the program’s history. Smith came to Notre Dame in 1968 to help start the hockey program, and remained the head coach for 19 seasons before retiring in 1987 with 307 career victories.

The Compton Family Ice Arena will have a capacity of approximately 5,000 patrons (seated and standing room combined) on two levels. In addition, office, locker rooms and training facilities for the hockey program will be located within the facility.

Mike McNeill, a South Bend native with a rich hockey history of his own will be managing the facility’s comprehensive community programs.

“I grew up as a rink rat playing here.  I know what a fabulous facility can do not only for hockey, but for the community as a whole,” says McNeill, manager of programming and instruction at the arena.

After five years as the director of hockey operations at the Icebox Skating Rink in South Bend, McNeill is working to grow hockey locally so that both facilities work together to maximize the availability of the arena’s four ice rinks. “With more kids on the ice, the sport becomes more affordable, and we can get players more exposure and playing time,” he says.