The “Ecuador Unframed: the Art of Oswaldo Guayasamín” project will bring the five-panel centerpiece of the acclaimed artist’s masterwork to the Notre Dame Center for Arts and Culture (NDCAC) Aug. 18-Oct. 23, with a grand opening event on Sept. 3.

The mural, depicting hardship, poverty, violence, hunger, and social injustice, is the centerpiece of another 103 pieces that Guayasamín created depicting Ecuador’s landscapes and people.

Ecuador’s government commissioned the work in the early 1950s to help establish national identity and lift morale after the Ecuador-Peru war that devastated the country, says Tatiana Botero of the Department of Romance Languages and Literatures, who is leading the effort.

Botero learned about the mural from research conducted by her husband, Carlos Jáuregui, an associate professor of Latin American Literature and Anthropology.

“I said I would love to bring this to Notre Dame, have this available to the community,” she said. A reproduction of the panels will travel to Notre Dame, then to other universities in the United States and Europe.

The original pieces were eventually framed, apparently against the artist’s intention to reflect the dynamic evolution of identity. Jáuregui commissioned the creation of an app that allows users to manipulate an unframed digital version of the panels into different meaningful combinations – at least 30,720 configurations.

The app will be on an iPad with the mural and a large TV screen to display the user’s arrangement. The technology is also used at the display of the original mural in Quito.

Botero leads the Guayasamín: Art in Motion (GAIM) team, including Rachel Parroquín, Elena Mangione-Lora, and Andrea Topash Rios, that is creating lesson plans for K-12 teachers. The plans will be on the NDCAC website along with YouTube videos created by Notre Dame graduate students on Guayasamín, his art, and his time.

Other events associated with the display include a lecture series – speakers include the Ecuadoran ambassador to the United States Guayasamín’s grandson – as well as teacher workshops, and field trips. 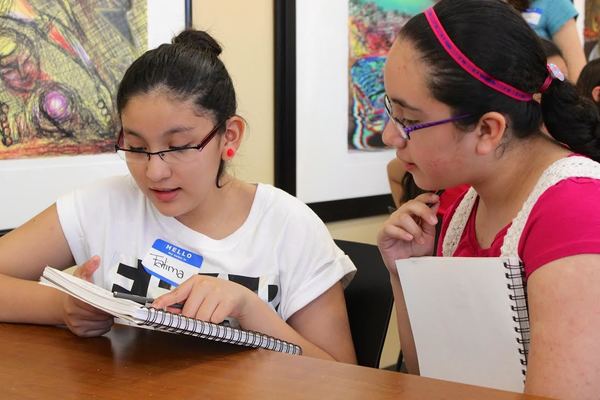 The mural provided the theme “Identity” for a series of week-long summer camps for middle school students at the NDCAC. The camps focused on art, cooking, photography, and creative writing. Students’ creations will be displayed with Guayasamín’s at the Sept. 3 grand opening.

When it leaves Notre Dame, the project will go to Vanderbilt University, Western Kentucky University, Assumption College in Massachusetts, and locations in Europe.