SOUTH BEND — Sarah Pavlovsky, 12, watched in awe on the University of Notre Dame campus as the small rocket she made at camp exploded into the air because of a simple chemical reaction using Alka-Seltzer tablets. She waited patiently as the judges determined which of her small group of participants’ rockets went the highest to the sky.

Sarah was one of 25 girls who participated in a weeklong all-girls camp in Stinson-Remick Hall at Notre Dame, sponsored by General Electric. From July 7 to July 11, young girls in grades six through nine did interactive projects using science, technology, engineering and math, or STEM, education. For some, including Sarah, this was their first time visiting a college campus.

“This is my first science camp,” Sarah said. “I think I want to be a mechanical engineer when I get older. I like to build things.” 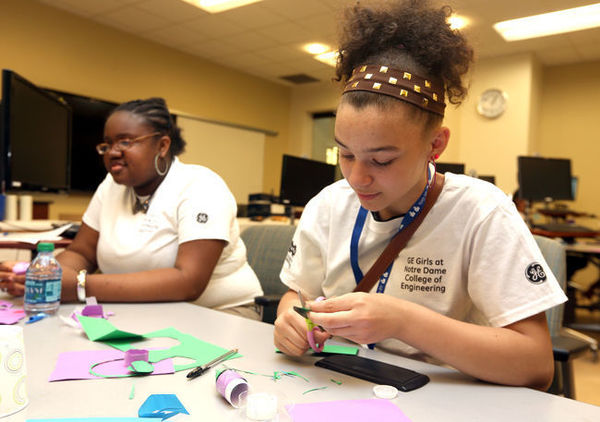 Christine Rohan, who is the co-chair for General Electric’s camp program, said this is the program’s third year, but the first time it has been on the Notre Dame campus.

“It’s a community outreach for STEM-based careers so young girls have the chance to experience these fields,” Rohan said. “We have almost all women helping with the camp, so it’s kind of a women helping women program.”

General Electric is an international company that works not only with appliances, but also with technology in energy, health, home, transportation and finance. Rohan said they hope this experience will help girls get into careers the company could hire them for in the future.

“When I was younger, I wasn’t really exposed to engineering,” said Lauren Kuta, 18, a volunteer for the camp. Kuta is a rising sophomore at Notre Dame, currently majoring in computer science and English. “These girls are still young enough so they have enough time to think about it.”

Over the week, the girls, who were chosen from each school based on essay submissions and science teacher nominations, learned different aspects of STEM learning. In addition to rockets, they also built balloon towers, boats, card towers, LEGO robots, made their own silly putty and lipstick and learned how circuits worked. They even visited Notre Dame’s Hessert Laboratory for Aerospace Research to see the circuits they had been working with in action.

Charity Vaughn, 12, who is going into seventh grade, said she really enjoyed the camp and wants to teach her siblings what she learned throughout the week.

“My favorite part was the rockets,” Charity said. “I just wanted to see them explode.”

For Anastasia Castellon, 13, who is going into eighth grade, her favorite part was learning how circuits worked.

“I think when I get older, I want to either be a lawyer or an engineer,” said Anastasia, who also had never been on a college campus before. “I really like science and math, but I also really like to argue.”

The Notre Dame communication contact for the girls’ camp, Victoria Goodrich, said she enjoys doing outreach for programs like the GE girls’ camp, especially when it helps girls and minorities.

Rohan said she hopes this program will help empower the girls who participated and also strengthen the relationship between businesses and schools.

“GE has a strong women’s network to improve the number of graduating female students,” Rohan said. “It’s good for them to have role models.”