As appeared in the South Bend Tribune, on Sunday, December 14

A synergy between Compton Family Ice Arena at Notre Dame and the Ice Box in South Bend has scored millions of dollars in visitor spending in large hockey tournaments and other events that fill a once-vacant wintertime tourist season.

“It’s been a game-changer for us,” says Rob DeCleene, Executive Director of Visit South Bend Mishawaka. “I think it singlehandedly has moved the dial relative to the occupancy rates in St. Joseph County. They host these events in months like December, January, February. They’re bringing business to town in months we didn’t have the business before.”

“That’s just one host and one sport,” DeCleene says. “There are others as well. Compton has the ability to host huge hockey tournaments, ice skating events, curling events, you name it.” 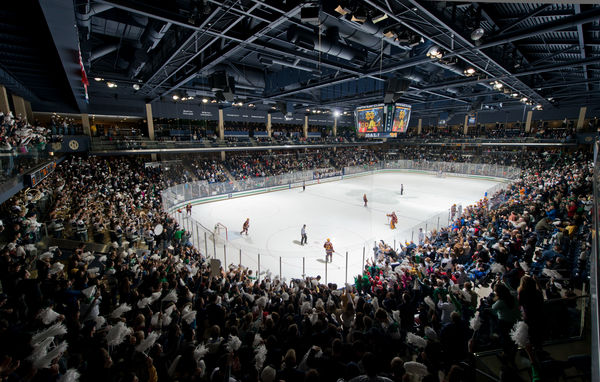 “When decisions are made at the high level at Notre Dame, they impact even a little business person like me,” she says. “I so appreciate the collaborative effort that Notre Dame has made to make sure their guests are spending their money and their time in Downtown South Bend.”

St. Joseph County, located in the heart of youth hockey country and well-supplied with hotel rooms, is especially attractive for large hockey tournaments because four sheets of ice – two at Compton, two at the Ice Box – are close to each other. Some tournaments even utilize two sheets at Culver.

DeCleene once took visiting hockey tournament officials to Compton and then to the Ice Box.

“They said ‘you have a really great combination here,’” he recalls. “‘You’ve got the upscale, new Compton, but then you’ve got the grassroots community hockey facility with the Ice Box and they’re in close proximity.’ It really works.”