The three-hour bus tour was created through a partnership between the University of Notre Dame, the City of South Bend and the South Bend/ Mishawaka Convention and Visitor’s Bureau (CVB).

Last year, Jackie Rucker, associate director for community relations, worked with both partners to “pilot” a tour for Notre Dame faculty new to the university. “Not only did we run over our time last year, but the participants didn’t want the tour to end!” Rucker says. “We decided to expand the tour this year to include new faculty and selected administrators from Holy Cross College, Saint Mary’s College, Ivy Tech and Indiana University – South Bend, and Bethel College.

Says Rob DeCleene, executive director of the CVB, “Really South Bend and Mishawaka are college towns—it is up to us not only share that image but to also promote all of the opportunities a college town has to offer. We want to put our best foot forward with these new members of our community!”

Violet Hawkins, Ivy Tech’s dean of public and social services, participated in the tour. “There is a lot going on in this town,” she says. “New faculty may not yet be acclimated to the area. It is good to start them off right, so they can better understand the community where they now live and work.

Notre Dame Chemistry professor, Vlad Iluc, describes his move to South Bend from the University of Chicago as smooth but hectic. Without much time to research the community before his arrival, Iluc was thrilled to participate in the tour, “I thought this would be a great way to get to know others and the city,” he says. After two months, Iluc was ready to expand his routine commute beyond his new home, campus and the occasional trip to the grocery.

Luis Loya, a native of Michoacán, Mexico and a new literature and Spanish-language professor at Saint Mary’s College, has already done his share of sightseeing. Since moving to the area from the University of Massachusetts Amherst, Loya regularly travels through South Bend’s west-side Mexican community on his bicycle, “I know all of the Mexican groceries and restaurants, but now there are a lot more places to come back and explore!”

The bus tour included a ride through South Bend’s historic district, a drive down “the avenue” in Mishawaka and sightseeing in both downtown areas. Also included were guided tours of the Oliver Mansion, the Center for History, the Studebaker National Museum, the South Bend Civic Theater and Shiojiri Niwa the Japanese garden across from Merrifield Park in Mishawaka. The tour was followed by a reception at Tippecanoe Place. 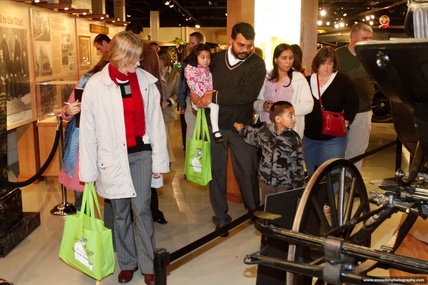 Sue Solmos, residential marketing specialist for the community and economic development division of the City of South Bend, describes the city’s perspective as a partner in the tour initiative: “It is important that we help our universities and colleges to recruit the best talent. Sometimes newcomers who are not yet acclimated don’t realize that the South Bend/Mishawaka area is not an ordinary place. Here, partnerships are easy,” she says. “People want to work together—they want to work for the common good. My hope is that we connect these new members of our community to that cultural tradition.”