By Gene Stowe, for NDWorks

A collaboration among Notre Dame departments provided 227 mattresses to eight local not-for-profit organizations, diverting the used dorm mattresses from the landfill while providing a rare opportunity for the agencies to fill an often-overlooked need.

Building Services, the Architect’s Office, the Office of Sustainability and the Office of Public Affairs worked together to recycle the goods, part of a recently established program for replacing mattresses campus wide. 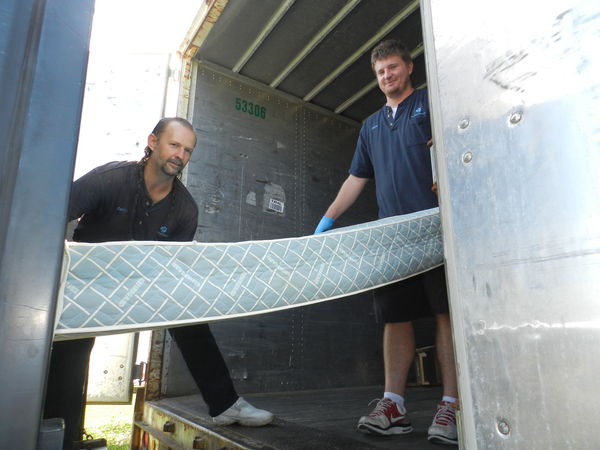 “We are saving the landfill,” says Jessica Brookshire, associate director for public affairs, who contacted the agencies when Erin Hafner, Programs Manager for the Office of Sustainability, alerted her that some 300 mattresses were available. “I made a number of calls and got rid of every single one we had,” although some were too worn for reuse. “These mattresses were 10 years old. That’s how long those mattresses had been in place.”

The 300 mattresses would have cost around $1,500 to recycle, Hafner says. “We’re really excited to be involved in this new recycling initiative,” she says. “We were able to match a need within the community for a majority of the used mattresses pulled from dorms during the summer replacement program that typically end up in a landfill.  Reuse is the best form of recycling!”

The mattresses went to Hope Ministries, the YWCA, Church Lady and Friends Outreach Ministries, AIDS Ministries, Mishawaka Food Pantry, Inc., Life Treatment Center, Boy Scouts of America and St. Vincent de Paul. Some agencies distribute to people who need them, some use them as part of their own residential services.

“Mattresses are probably the most asked-for item at the pantry and the least item donated to the pantry,” says Mike Hayes at the Mishawaka Food Pantry, which took 42 mattresses. “That was pretty phenomenal for us. We just made space for them because they’re such a sought-after commodity.”

“We use them all here at our facility at the YWCA,” says Greg Butts, who took 60. “Some of ours have been beaten up and destroyed over the years. We had looked at purchasing some and we didn’t have the funds. It was the perfect time for Notre Dame to give us some. Last time we looked, when we wanted to purchase 20 of them, they were $120 apiece.”

Four families that needed beds came to the YWCA the day that the mattresses arrived.  “We can never turn somebody down in need,” Butts says. “It’s just our policy. We find a place for them, even if it requires tossing a mattress on the ground in one of the rooms. It came at just the right time.”

Similar initiatives on campus could provide more help for the community, Brookshire says. “Before they throw things away, think about the surplus properties initiative as well as the idea that other people can use it,” she says. “One man’s trash really is another man’s treasure.”