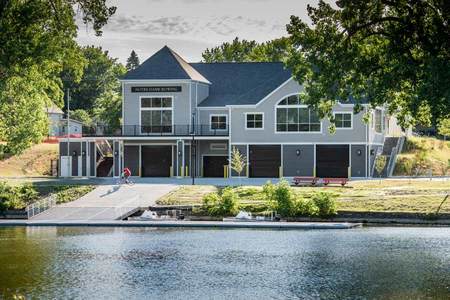 The construction of the McConnell Family Boathouse on the St. Joseph River near downtown South Bend ushered in a new era for the Fighting Irish rowing teams. It also began a new era for the South Bend Scullers and Paddlers. The old Notre Dame boathouse is now managed by the South Bend Scullers and Paddlers organization for the community’s benefit, offering boat storage berths for rent and providing a place for community rowing and paddling programs.

Edward (Ted) Beatty, a Notre Dame history professor and associate dean of the Keough School of Global Affairs, has been a canoe and kayak paddler for years. About a decade ago, he met Patrick Sawyer, an avid South Bend area kayaker and cyclist who was tragically killed while riding his bike in 2008.

“Patrick had a vision for a local water sports center on the river,” Beatty said. “That planted the idea. Then two or three years ago, Dick Reineke, former president of the older South Bend Scullers group, incorporated myself and some other canoe and kayak paddlers into their dwindling group to revitalize it and establish a firm base to negotiate with Notre Dame and the city over boathouse space as Notre Dame planned their new boathouse.”

As the University initiated the project, the South Bend Scullers and Paddlers contacted Notre Dame and proposed the idea of trading their old, small building, which had to be razed for the new boathouse, for possession of the larger, former Notre Dame boathouse. Although there is no formal relationship between the University and South Bend Scullers and Paddlers, the two entities joined forces to make the vision a reality.

“Notre Dame has been a terrific support in that process of transition, advocating for this trade with the city, which actually owns the land and the building, resulting in our lease of their old boathouse from the city,” Beatty said. “Notre Dame continues to be a strong support as we begin the process of planning a community rowing program.”

Beatty notes that the boathouse gives the Scullers and Paddlers an ideal location to offer people in the South Bend community the opportunity to keep their canoes, kayaks and rowing shells on the river.

“Many people have boats, but do not use them often because of the hassle of loading them onto cars and transporting them,” Beatty said.

The University’s contribution to the local rowing community was not limited to helping the Scullers and Paddlers obtain their new boathouse. For three weeks this past summer, Martin Stone, head women’s rowing coach, and other Notre Dame coaches took community members out onto the river for rowing lessons, using the team’s eight-seat boats.

“We are planning on developing a more active community rowing program over the coming years and hope that Notre Dame will continue to be a critical support and partner in this process,” Beatty said.