NOTRE DAME, Ind. – The frigid temperatures and icy roads may have kept South Bend kids indoors all week, but graduate student Tom Knight and the Reduce Obesity Coalition (ROC) will look to get everyone on their feet and active this weekend.

The organization teamed up with Student Welfare and Development to put on the ROC UR Body Community Event this Sunday, Jan. 12 from 1 – 3 p.m. in the north dome of the JACC.

Knight got the ball rolling for the event after he volunteered with ROC in the fall. 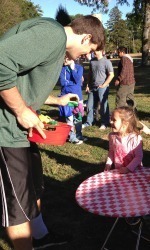 “I just thought it was a cool concept and that maybe they should do something in the winter, too,” the men’s basketball forward explains. “Sometimes it’s hard for kids to find ways to stay active—they just sit on the couch and play video games and gain weight. Obesity is a big problem in America, and that’s something that I’m passionate about, so that’s where the idea came from.”

Knight says he found himself aligned with ROC’s initiatives, which include three goals: community collaboration, outreach, and education. In the dead of winter (especially South Bend winters), there are not as many resources and opportunities to stay active, but he thought Notre Dame might be able to help further ROC’s goal in the community.

Intent on raising awareness of the problem of obesity and showing how we can combat it, Knight approached Student Welfare and Development with the idea for an event.

“It was easy to get behind his idea for the men's basketball team to host a winter event with the Reducing Obesity Coalition because he was an enthusiastic force behind the project coming to fruition,” says Student Welfare and Development program coordinator Ally Stanton. “I think our whole office appreciates how he's chosen to use his free time so selflessly.”

Knight is modest when it comes to discussing his involvement in the project, but he also explains that he is lucky to be able to take advantage of his time as a graduate student at Notre Dame to give back.

“Last year, when I was trying to graduate, I had a busy class load and didn’t have as much time to be involved in the community like I wanted to,” Knight confesses. “Now with the free time that I have and the reduced class load, it’s allowed me to do some things that I’m passionate about.”

Activities this Sunday will include cooking demonstrations, information from Notre Dame Sports Performance, and some opportunities to get up and play in an obstacle course, basketball hoops, inflatable hockey games and putting with men’s golf, among other things.

Knight says he’s looking forward to a big turnout and most of all just playing with the kids and having a lot of fun.

“It's always really fulfilling to see a student-athlete led initiative come together successfully,” Stanton says. “It took a lot of good folks to help make this event happen. I'm looking forward to seeing it in action Sunday.”

The ROC is tracking attendance through RSVPs on their Facebook page. Notre Dame fans and community members can still register there, and the Irish are looking forward to seeing everyone on Sunday at 1 p.m.