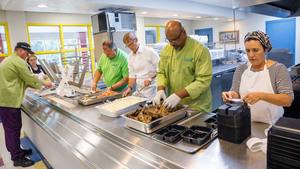 The University of Notre Dame Athletics Department and Levy, the food service provider for Notre Dame Stadium, are partnering with a local nonprofit to reduce food waste, contribute to food security and support job training this football season — part of a broader focus on sustainability campuswide.

With every home game this season, Levy will donate leftover food from the stadium to Cultivate Culinary School & Catering, a local organization that prepares at-risk high school students and adults for jobs in the food service industry.

This includes food that is prepared for catering within the stadium but not served, though not general concessions.

Based in South Bend, Cultivate “rescues” leftover food from local suppliers and then processes and freezes it for resale to food pantries in northern Indiana.

Packaged in recyclable, microwave-safe trays, the resulting dishes and meals cost 75 cents each and provide pantries a low-cost, nutritious alternative to canned and boxed foods.

The organization, which only entered the food rescue space over the summer, ultimately hopes to partner with sponsors to offset the cost of the meals in whole or in part.

“These are catered meals that somebody paid for, so they’re well prepared,” Randy Z, president, co-founder and executive culinary instructor for Cultivate, said of the quality of the food.

The organization has rescued more than 10 tons of food since August, processing 4,000 to 5,000 pounds per week out of a kitchen on Niles Avenue in South Bend, according to Jim Conklin, Cultivate’s treasurer and co-founder.

Culinary students currently assist with the process, Conklin said, though Cultivate is rapidly moving toward an all-volunteer workforce comprised of local high school and college students and members of the general public.

“What we’ve found is we’re outgrowing our kitchen here and we need to keep the assembly line moving so we don’t have to throw out food ourselves,” said Kelly Hofferth, executive director of the organization.

For now, at least, the partnership focuses on Notre Dame Stadium, though it could grow to include other campus venues as well, including Purcell Pavilion at the Joyce Center and Compton Family Ice Arena.

“Notre Dame athletics is proud to partner with the Office of Sustainability this home football season to showcase the amazing sustainable features of the newly renovated Notre Dame Stadium,” Senior Associate Athletics Director John Heisler said. “Food rescue is paramount, and athletics is thrilled to have Cultivate and Levy join in this exciting initiative.”

From a logistical standpoint, Levy will gather the leftover food, label it and refrigerate it within the stadium for pickup after each home game, Conklin said.

Cultivate, with logistical support from Goodwill Industries of South Bend, will retrieve the food on Sunday, he said, weigh and sort it by type — protein, starch or vegetable — for statistical purposes and then process it on Monday, Tuesday and Wednesday.

The organization is looking for volunteers to help with the work in one- to two-hour blocks, Hofferth said, particularly on the processing side.

But food rescue is just part of Cultivate’s mission.

The organization also operates a youth job-training program for high school students out of its  facility on Niles Avenue. And it’s developing an additional program for out-of-school youth and adults in partnership with Goodwill, which has its own kitchen on the city’s west side.

The programs are designed to prepare at-risk teens and adults for jobs in the culinary industry, Conklin said, with participants earning school credit and/or professional certification upon successful completion of the required course work.

In addition to supporting job training, the partnership builds on Notre Dame’s efforts to reduce water and energy consumption and divert waste on campus as part of a long-term, comprehensive sustainability strategy.

And it contributes to food security in the community by providing meals to the needy.

“From a sustainability standpoint, we’re always looking for opportunities to enhance what we’re already doing on campus,” said Elizabeth Westfall, senior program manager in the Office of Sustainability, “and we see this as a good place to start.”

According to the Natural Resources Defense Council, 40 percent of the food in the U.S. is wasted. At the same time, 1 in 8 Americans struggles to put enough food on the table.

Notre Dame is not immune to the problem, Westfall said, but it is taking steps to address it.

Already, Campus Dining, in partnership with Food Rescue US and FoodShare, donates excess food from the North and South Dining Halls to the Center for the Homeless and Hope Ministries in South Bend.

This is on top of existing efforts to reduce game-day waste, including a new single-stream recycling program for bottles, cans and paper products inside of the stadium.

The Office of Sustainability has also chosen a sustainability theme for each home game this season, including food rescue for the Nov. 4 matchup with Wake Forest University.

Food rescue is not new to Levy, which began managing clubs and concessions at Notre Dame Stadium and other campus venues in 2016.

The Chicago-based company, which provides vending and food services to dozens of major sports venues worldwide, already donates leftovers to Second Helpings in Indianapolis and the Mid-Ohio Food Bank in Columbus, Ohio, among other groups.

“Reducing waste and being good community partners underscore everything we do,” said Karen Schirmuhly, director of operations for Levy at Notre Dame, adding, “Working with organizations like Cultivate Culinary School & Catering helps in both areas.”

Originally published by Erin Blasko at news.nd.edu on September 06, 2017.