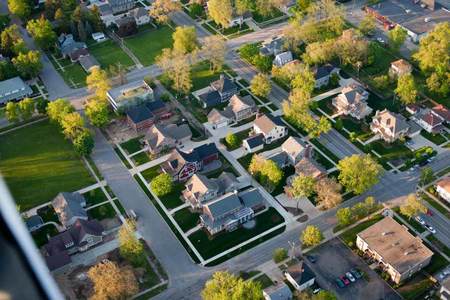 In the early 2000s, the outlook for the Northeast Neighborhood (NEN) of South Bend, located immediately south of Notre Dame’s campus, at its “front door,” was bleak. A number of nagging problems affected the area, which is a large, predominantly residential area situated in the northeastern quadrant of South Bend, just northeast of downtown and east of the St. Joseph River.

The housing stock in the NEN had deteriorated significantly over time. What had once been a highly desirable family neighborhood favored by Notre Dame faculty and staff had become severely blighted.

NEN endured the “rust belt cycle” in which jobs were lost, families moved out, and properties were bought by investors for rental housing. Investors targeted Notre Dame undergraduates seeking off-campus housing, which in turn negatively impacted the family feel of the neighborhood.

Football fans bought single-family homes to use as their in-town residences because they were convenient to campus and the prices were low when compared to the buyers’ home markets. While some of these homes were well maintained, others were not. And since the homes were typically occupied only six weekends a year, they gave the neighborhood an empty, abandoned feel.

“All of these issues detracted from the appeal of the NEN as a family neighborhood,” says Greg Hakanen, Notre Dame’s director of Northeast Neighborhood Redevelopment.

The University had long considered how to best contribute to and revitalize the troubled neighborhood. What was the best way to transform it?

Out of that collaborative vision, the Notre Dame Avenue Housing Program (NDAHP) was born. The program was designed to encourage home ownership and revitalization in the area of the Northeast Neighborhood directly south of campus.

In the beginning, the University bought properties preemptively, preferring to control nuisance properties and tear down blighted structures. In 2001 the decision was made to recycle these properties and encourage new home construction. The Notre Dame Avenue Housing Program sought to create high-quality housing and to replace transient residents with full-time Notre Dame employees, renters with home owners, and part-time residents with full-time residents. The vision was to re-establish the NEN as an attractive, safe, high-quality, family area to live, making it an asset rather than a liability for the City of South Bend and the University. The first four homes were completed in 2002.

Hakanen points out that because the first homeowners were “pioneers,” the University offered two key incentives: a discounted price and a buy-back obligation.

These incentives were no longer necessary after the first four homes.

NDAHP participants design and build their homes according to University guidelines.

“The homes have to be the participants’ primary residence,” Hakanen says. “Garages can’t face the primary street, which lends a subtle, but high-quality feel to the neighborhood. Every house has to feature a front porch, for both architectural and social reasons.”

As the NDAHP approaches its 15th anniversary in 2017, 45 homes have been built or rehabilitated under the program, and approximately 10 more will be built in the neighborhood before the program ends in 2017.

“From the beginning, the goal for the program was to ‘get the ball rolling’ and let nature take its course,” Hakanen says. “The University wanted to establish the character and quality of the neighborhood and create enough critical mass to encourage others to build or rehab homes on their own. There is ample evidence that we’ve reached that goal.”

Today, stately homes with manicured lawns and large front porches characterize the Notre Dame Avenue Housing portion of the neighborhood. Despite the University’s guidelines on construction, a rich mix of architectural styles can found. Nearby, in the “Triangle” area, located north of State Road 23 and south of campus, a major mixed-income, single-family home development is well underway. And the Eddy Street Commons, a mixed-use development adjacent to campus features retail, residential, hotel and office spaces, has added to the neighborhood’s revitalization. Through the collaboration of Notre Dame and its residential and community partners in the NNRO, the Northeast Neighborhood has been transformed into an enviable example of urban renewal done well.