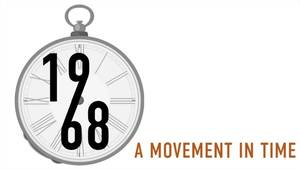 The University of Notre Dame Center for Arts and Culture, in collaboration with various campus and community partners, is sponsoring a yearlong series of events around the theme “1968: A Movement in Time.”

Marked by civil and political unrest, 1968 saw the escalation of the war in Vietnam; the assassinations of Martin Luther King Jr. and Robert F. Kennedy; passage of the landmark Civil Rights Act; violent protests outside the Democratic National Convention in Chicago; and the election of President Richard M. Nixon.

Consistent with the center’s educational mission — combining art, culture and community engagement — the series seeks to place the year in context with a focus on the defining art, music, culture, political movements and historic events of the time.

“This type of programming provides an opportunity for the entire community to collaborate around a central theme,” said Jackie Rucker, associate director of community relations at Notre Dame. “1968 was an exciting year, some events good and others not; it served as a pivot point for change in the world in a variety of areas.”

The series is part of the center’s “Global Experience,” a foundational program that seeks to educate students and community members on issues of history and cultural diversity.

Upcoming events include the Institute for Latino Studies’ Transformative Latino Leadership Lecture Series featuring Dolores Huerta, co-founder of the United Farm Workers, and “Say it Loud, I’m Black and I’m Proud,” an evening of music and discussion around the life and legacy of the musician James Brown hosted by the Indiana University South Bend Civil Rights Heritage Center.

In addition, the Browning Cinema at the DeBartolo Performing Arts Center is hosting “Learning Beyond the Classics,” a film series highlighting the year in cinema, including “Fireman’s Ball,” director Milos Foreman’s satire of communism, and the Vietnam War documentary “In the Year of the Pig.”

Additional events will be scheduled throughout the year.

“I encourage people to check the webpage often as our higher education and community partners continue to post events that will occur throughout the 2018 year,” Rucker said.

Originally published by Erin Blasko at news.nd.edu on February 08, 2018.