The frustrations of a tough season and a rigorous academic load seemed minimal compared to what 150 guests at South Bend’s Center for the Homeless face every day.

The Irish players celebrated their first day of fall break by attending a dinner with the guests. Players spread out three or four at a table. 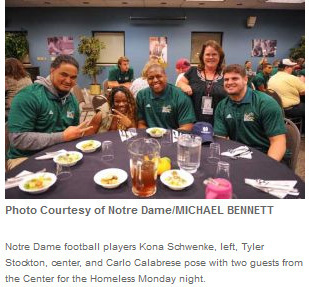 Even quarterback Tommy Rees, who left Saturday night’s win over Southern Cal with a neck injury, was part of the entourage. Rees swiveled his head from side-to-side with little effort, and had no trouble posing for pictures with several of the guests.

Besides the fellowship shared over the meal, Niklas’ campaign yielded $4,700 that was presented to the center. Also, several area businesses that partner with Kelly Cares donated to goodie bags that were given to each guest. Along with toiletries and other items in each bag was an inspirational note from a player.

“It’s like breaking bread with everybody,” said Paqui Kelly, Brian’s wife. “It’s a great way to come together.

“I like these events because they’re a two-way thing. The players get to go and be seen in a different light than what you see on intensity Saturday. They’re just great guys.”

“Our guys are so blessed with so many things — a scholarship, athletic ability, intellect,” Brian Kelly said. “Most of them come from great upbringing. This is an opportunity to think about others.

“Tonight, they’re inspiring, and they’re getting inspiration at the same time. Right at that same table. They’re a Notre Dame football player, but they’re being inspired by someone who is less fortunate.”

“I hate to say it, but we’ve almost gotten more out of this than (the guests),” Niklas said. “Sometimes you don’t know how much you have until you see someone who doesn’t have anything. Being here at Notre Dame, we’re so blessed.

“A lot of people like me don’t have two parents in the household and they struggle through life. It adds inspiration to me.”

Back home in Fullerton, Calif., Niklas developed a sensitivity for the homeless. He was active in Servite High School’s mission of responsibility toward them.

He carried that mission east.

Niklas went door-to-door in his dorm soliciting contributions. Who’s going to say no to a 6-foot-7, 270-pound guy offering candy in exchange for cash? Several other players took up the challenge to raise money.

“It was not out of character as much as it was the side we hadn’t seen of (Niklas),” said Brian Kelly. “As he’s matured, he’s felt more comfortable being Troy Niklas. That maturity comes out as he becomes more confident in himself, letting his guard down and not being that quirky, zany guy we saw just last year taking his shirt off at the pep rally.

“There’s a little bit more to Troy Niklas than that.”

“I try and grow as a person,” Niklas said. “Sometimes the process is a little bit slower than it is for others.

“It’s important to give back, especially with the opportunity that we have.”

Though there were a few emotional statements of gratitude from the guests and the players, the evening was mostly lighthearted. Brian Kelly got his share of comments as he worked the crowd.

“A couple guys asked me where Rudy was,” Brian Kelly said.

“I said, ‘I know I’ve aged in my four years here, but I didn’t think I’ve gone that quickly,’” Brian said with a laugh.

“They’re people, they have stories,” the tight end said. “It’s fun to hear them talk. Carl, at my table, talked about what it was like when he played high school football, and the events that led him here.”

Everyone faces their own challenge every day. Seventy very fortunate young men learned a lesson Monday.