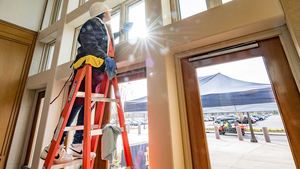 But for 14 local women, the structures, comprising 800,000 square feet of classroom, research, student life, media, performance, meeting, event and hospitality space, are a welcome source of light on the otherwise dim path to financial security.

The women — clients of St. Margaret’s House, a South Bend day center for women and children who struggle with poverty — work for My Best Friend Services, a local cleaning company hired to mop, dust, polish and scrub the massive new buildings, as well as other renovated areas of the stadium, prior to final occupancy.

Jacki Elliott, owner of the business, hired the women earlier this year after attempts to recruit new employees through traditional means — print and online job postings and referrals — proved ineffective because of low unemployment and a tight labor market in the area.

Elliott had previously donated to St. Margaret’s house, dropping off old business clothes for the women to wear to job interviews.

But not until the economy improved and the labor market tightened did she consider them as possible job candidates.

Founded in 1990 by members of the Episcopal Diocese of Northern Indiana and Cathedral Church of St. James in South Bend, St. Margaret’s House assists women and children in need with food, clothing, education and other resources from a facility on Lafayette Boulevard in South Bend.

About a quarter of the center’s regular clients are homeless.

Kathy Schneider, who holds both a bachelor’s degree and master of divinity from Notre Dame, is executive director of the day center.

“She called me up one day and said, ‘Kathy, I’ve got some opportunities for work, and I want to change women’s lives,’” Schneider said of Elliott. “She knew there were women out there who really needed a chance. So she wanted to offer a fair day’s pay for a fair day’s work.”

Elliott arranged to interview the women.

St. Margaret’s staff, meanwhile, helped the women to draft resumes, complete the required application and prepare for the interview process.

“She interviewed them on the spot,” Schneider said of Elliott. “And she hired many of the women on the spot.”

“I went in for an interview and they basically said I had the job on the spot, so that was a blessing,” said Carter, who discovered St. Margaret’s while living at a homeless shelter in South Bend with her mother and two young children, ages 2 and 6, after moving here from Chicago.

Now a supervisor with my Best Friend Services, Carter has since moved into a house in South Bend.

Lynette Cooper also was hired on the spot.

“They told us they were going to be coming in and hiring 30 girls or something for a job and I said, ‘I want a job.’ So they helped us do our resumes and everything and then they hired us,” said Cooper, 53, who had been out of work for more than five years.

Previously, Cooper said, she had more or less given up on the possibility of full-time work because of health issues and family obligations, which tended to frighten off employers.

The women started out cleaning Jenkins Hall and Nanovic Hall in April before moving onto the Campus Crossroads buildings in June. They’ll clean each of the buildings three times: at the end of construction; after the furniture is delivered and set in place; and before final occupancy.

For many of the women, the job is a rare opportunity to participate in the workforce and gain valuable skills and experience after years of being ignored or overlooked in the job market because of a lack of education, experience or both — or because of past mistakes that they have worked to overcome.

“Because we’re a community of women and we know each other here, we knew that we had women who could work if just given a chance,” Schneider said. “I’ve known people who hadn’t worked in five or six years, and they’re working full time now. It’s lovely. It’s just wonderful.”

But Elliott, a former single mother herself, did more than just hire the women.

She coached them, Schneider said, and arranged for transportation for them to and from work until their first paychecks arrived, including renting a van to transport them to campus and back the first week.

She also worked with St. Margaret’s to offer “lunch and learn” sessions during the workday to help the women adjust to the demands and expectations of the workplace.

Carter said, “My Best Friend Services, they understand that we are people and we go through things, and they help us in the midst of everything to get things done. They work with us. They’re flexible.”

St. Margaret’s, meanwhile, provided lunch for the women for the first few weeks “to make sure they fit in” with the rest of the crew and had something to eat, Schneider said.

Julie Boynton, director of interior architecture for Notre Dame, helped select My Best Friend Services for the job. Boynton previously worked with Elliott on Biolchini Hall of Law, the Morris Inn and McCourtney Hall, in addition to Jenkins and Nanovic halls.

“It has been very rewarding to meet and work with the ladies on Jackie’s team. They have worked very hard with great attention to detail all the while doing so with a ready smile and ‘hello’ each time they see you,” Boynton said.

“Their work is excellent,” she said. “We are pleased to be able to work with My Best Friend Services and to help provide a training and work opportunity for some incredible women.”

Women like Tiffany Brown, 28, a single mother of five.

“To be able to take care of my children and to be able to fill up on hours like we do is wonderful,” Brown said. “Jackie really saved my life. And St. Margaret’s has too.”

For Schneider, its further confirmation of the lessons she learned as a student at Notre Dame.

Originally published by Erin Blasko at news.nd.edu on November 02, 2017.