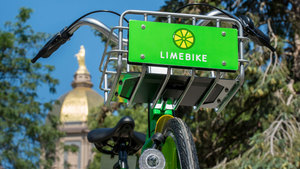 Among objects both animated and inert, the fluorescent LimeBike appears to have overtaken the squirrel as the most ubiquitous on campus.

The University partnered with the California-based bike-share company for 175 of the dockless, Wi-Fi connected bicycles in August, joining the city of South Bend and more than two dozen other communities and campuses across the U.S.

Since then, students, faculty and staff have logged thousands of trips on the sturdy lime green bicycles, which seem to be everywhere, from LaFortune Student Center and the Hesburgh Library to Rolfs Sports Recreation Center and Eddy Street Commons.

Riders use an email address to sign up for the app-based service, which costs 50 cents per half hour for students, faculty and staff and $1 per half hour for all other riders, and LimeBike tracks ridership by domain name.

The company, which launched with $12 million in venture capital in March, partnered with the city of South Bend for a minimum of 500 bicycles in July, and the two systems operate as one, encompassing South Bend and surrounding communities.

For the two-month period ending Sept. 11, “.edu” riders, including Notre Dame students, faculty and staff, accounted for 54 percent of all trips on the combined system, or about 8,000 trips per week.

Ridership noticeably spiked after students arrived on campus in August, from about 10,000 trips and 5,200 unique riders per month beforehand to about 68,000 cumulative trips and 14,000 unique riders afterward.

The system averaged 500 unique .edu riders per day, accounting for nearly 27,000 miles pedaled — exceeding by 3,000 miles the circumference of the Earth. Median ride time was 5 minutes, long enough to pedal from one side of campus to the other.

“LimeBike has provided another method of transportation both on campus and in the community,” said Jessica Brookshire, associate director for Public Affairs at Notre Dame. “I have seen faculty, staff and students participating both for transportation as well as recreation.”

The rollout has not been without issues.

Riders continue to leave the bikes in places not meant for parking, such as lawns or sidewalks, and the center-mount kickstands have proven unstable in some situations, such that the bikes end up on the ground.

LimeBike is working to address both problems.

It is replacing the center-mount kickstands with side kickstands and reminding riders to park near racks or in other areas where the bikes will not block traffic, impede pedestrian access or encroach on private property.

Notre Dame is among a growing number of schools, including the University of Washington and the University of North Carolina, Greensboro, partnering with LimeBike, which has quickly grown into one of the leading bike share companies in the U.S.

The nascent startup, already worth an estimated $200 million, offers a dockless system of the type popular in Asia that uses mobile technology in place of static docking stations, reducing asset and maintenance costs and allowing for rapid deployment across diverse markets and greater convenience for riders.

“It’s really convenient,” said Thomas Wine, a first-year Notre Dame student from San Francisco, where LimeBike operates in nearby South San Francisco. “I have friends at other universities in the Midwest and East that haven’t heard of them.”

Wine pays $14.95 per month for a LimePrime membership, which includes 100 rides per month. Subsequent rides cost 50 cents per half hour.

“It’s nice having the ability to ride a bike without actually having to buy one,” he said after a recent trip, seated on a bench next to the bike outside Hesburgh Library “It’s a lot less expensive.”

Originally published by Erin Blasko at news.nd.edu on October 04, 2017.