Notre Dame, Ind.—Looking for a closer encounter with your favorite video game? Are motion control systems like Kinect or Wii still too virtual for you? How would you feel about a robot literally chasing you across the floor? 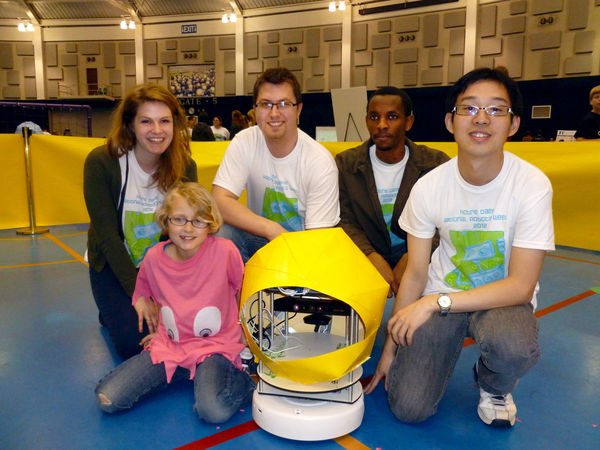 “PacBot” is a new take on the classic PacMan videogame. True to the original, PacBot goes after the ghosts—which in this case are kids wearing pink colored t-shirts. My nine-ear-old daughter Jade threw on a shirt and tried it out.

“It felt more fun than the video game. It was like I was in the game instead of playing it,” she said.

PacBot was just one of the interactive robotic experiences to be had at a recent public event at the University of Notre Dame celebrating National Robotics Week. More than 65 students and faculty members from Notre Dame’s colleges of Engineering and Arts and Letters, Saint Mary's College, and the Robinson Community Learning Center demonstrated their robots and discussed their research. The daylong event drew over 600 adults and children from the community.

“I wanted to give the community a chance to learn about many of the exciting research and educational activities in robotics happening around the University, as well as to provide my students a chance to connect with the community and demonstrate their work to a larger audience,” said Laurel Riek, assistant professor of computer science and engineering at Notre Dame.

Six of the robot exhibits were final projects created this semester by Riek’s engineering students who teamed up with Saint Mary’s College art students. Riek's class is called Autonomous Mobile Robots, where students learn how to design robots that can sense, think, and act in the world completely automatically.

“The final project was intended to mirror what students would encounter in industry—interdisciplinary teams working together to solve problems,” Riek explained.

The ‘problem’ here was how to get kindergarten to twelfth grade students excited about robotics and STEM (science, technology, engineering, and math) fields.

“To do this, I thought giving the robots visual and playful elements would be really helpful,” she said.

So she teamed up with Krista Hoefle, associate professor of art at Saint Mary's, known for her passion for electronic sculptures (robots). Hoefle’s Beyond the Object course students were introduced to those in Riek’s robotics course. The resulting projects included a robot that knits, robots that play soccer or laser tag, a robotic pet, and PacBot.

Hoefle said the assignment helped her students see their skills in a different light.

Art student Theresa Nucciarone, a junior from South Bend, worked with two mechanical engineers and a computer scientist with the know-how to make a butler type robot. Rather than have the robot simply fetch things for the user, Nucciarone thought it would be fun to make the interaction into a game.

“The idea of PacMan just came to me,” Nucciarone said. “We were talking about how we wanted to emphasize the interactivity of a game, and what I saw was PacMan.”

Notre Dame engineering PhD student Travis Brown explained, “The robot uses a Kinect sensor to do the object tracking. He locks in on the kids and ‘gets’ them. In the other mode, the kids can chase him and if they bump the front of the robot, then he dies. It’s a pretty simple game and it seems to be a great hit with the kids.”

Pictured from left to right are Saint Mary’s College student Theresa Nucciarone and University of Notre Dame students Travis Brown, Sam Njoroge and Kai Zhao. In front as the “ghost” is Ellie Brown, daughter of Travis, and “Pac-bot.”