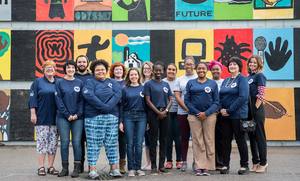 “How do you know you’re making an impact?”

The question posed, Jennifer Knapp Beudert, director of the University of Notre Dame’s Robinson Community Learning Center, scanned the room for answers, landing on a young man with black jeans, a brown knit cap and a short, bushy beard.

“It’s a little tricky, I guess,” the man said. “Art is more of a subjective type of thing.”

It was day two of orientation for the group of 13 AmeriCorps members — 12 women and one man sipping water and coffee and picking at the remains of breakfast — fruit, muffins, yogurt — inside of a meeting room at the center.

An off-campus educational initiative of Notre Dame, the Robinson Community Learning Center relies on AmeriCorps to pursue its core mission: joining with community and Notre Dame partners to strengthen the Northeast Neighborhood, south of campus, through relationship building and educational opportunities.

The man in question, Joe Russo, was returning for a second year of service with the Robinson Shakespeare Company, the center’s youth Shakespeare company, which recently returned from England where members performed “Cymbeline” in Stratford and London.

“I think a lot of it becomes anecdotal,” said Russo, continuing to chew on the question. “But a lot of our kids are returning, so seeing their improvement over the years” speaks to the program’s impact.

Yes, but there is something else, Knapp Beudert prodded, “something big you do at the end of Shakespeare.”

After seven years, the Robinson Community Learning Center’s relationship with AmeriCorps, a network of local, state and national service programs that engage more than 80,000 Americans per year, remains as robust — and as important — as ever.

But as the center welcomes its newest group of AmeriCorps members, the future of the program remains in doubt, with the White House proposing to eliminate the agency that oversees it.

The center, meanwhile, is in the middle of an enrollment push, looking to fill as many as 14 open AmeriCorps positions — full- and part-time, year-round and seasonal — within the next several months.

Nevertheless, Knapp Beudert remains upbeat about the program, which, she said, serves as a “very cost-effective way to provide a lot of services to communities” while investing in the future workforce with skills and leadership training and educational benefits.

Between members and volunteers, AmeriCorps provides 43,000 hours per year of direct service to the South Bend community at a cost of $3.95 per hour — much lower than the minimum wage of $7.25 per hour in Indiana, Knapp Beudert said.

And thanks in part to the experience itself and the complimentary education award, members have gone on to become teachers, business professionals and nonprofit managers.

“It’s really investing in the education of the AmeriCorps members,” Knapp Beudert said.

Partnering with AmeriCorps was one of Knapp Beudert’s first acts after joining the Robinson Community Learning Center in 2010.

“We had really reached the capacity of what we could do with our existing staff,” she said of the situation at the time. “So I applied that year and, much to my surprise, we got a three-year grant.”

Often referred to as the “domestic Peace Corps,” AmeriCorps engages legions of Americans in intensive service each year at thousands of locations across the country, from nonprofits and schools to public agencies and community groups.

Members serve one-year terms and receive a modest living allowance for service and health care. They also receive an education award for student debt or tuition that is good for seven years.

Members must be at least 17 to apply for the program and at least18 during their term of service; have a high school diploma or equivalent; be a U.S. citizen or green card holder; and pass a background check.

“What we look for is someone with some sort of track record of dedication to the type of work that we do, some kind of interest or demonstrated experience,” Knapp Beudert said. “A good team player, but also someone who can take the initiative and work independently.”

The AmeriCorps grant program runs on a three-year cycle, though funding is subject to annual approval by Congress, which has currently approved funding through August of next year.

Among other things, the program has allowed the center to expand its outreach in the community, add locations and programming and grow its volunteer base by half over the past seven years, Knapp Beudert said.

Currently, she said, at least one full-time AmeriCorps member, along with several part-time members, serves in each of seven program areas — Adult Programs, Youth Development, Shakespeare, Youth Entrepreneurship, Take Ten, Literacy and Talk With Your Baby.

As a result, she said, “We’ve been able to expand our outreach and add more sites and reach more youths and adults. Without AmeriCorps, we would have to significantly reduce our programming.”

“I was actually looking at the Peace Corps, but there were some things going on in my family that made me want to stay in the country,” said Johnson, a Notre Dame graduate from Atlanta. “And AmeriCorps is kind of the domestic version of Peace Corps, so I thought it was a good opportunity to serve.”

Also, she said, “The benefits are good for education and graduate school.”

A South Bend native, Wilson previously worked with Take Ten as a freshman at Indiana University South Bend, where she earned her degree in psychology.

“I really enjoyed it,” she said of the experience. “And then I just saw that (Robinson was) hiring and I said, ‘I have experience, and this is something I’ve always wanted to do.’ I love my community.

She plans to use the education benefit, worth as much as $5,920, to pay down student loan debt and pursue a graduate degree in psychology and law, she said.

The Robinson Center is not the only beneficiary of the program.

The center shares AmeriCorps members with like-minded organizations, including the Westville Education Initiative, a collaboration between Notre Dame and Holy Cross College to educate inmates at the Westville Correctional Facility in LaPorte County, and El Campito, a nonprofit child development center in South Bend.

Members assigned to the Westville program perform a variety of tasks, including building and managing the library system, entering and managing data and physically opening the academic space at the prison so that students have access to the computer lab and library.

Should the program go away, it “would be a huge loss,” she said.

Back at the Robinson Center, Abby Johnson, the Notre Dame graduate, reflected on her previous year of service with Take Ten.

“It was awesome,” she said during a short break between training sessions. “I’d never done volunteer management work before, so I learned a whole lot. And it was cool to see how I changed. The first semester I was learning, kind of finding my sea legs. But the second semester, I had it all down.

Originally published by Erin Blasko at news.nd.edu on September 26, 2017.