In 2008, Christy Burgess left her “dream job” in rural Alaska where she ran a Shakespeare program outside the city of Fairbanks. As a new South Bend resident who arrived shortly after 2008’s financial crash, Burgess did not anticipate finding a job in drama literacy. “I worked with such an amazing group of actors in Alaska. I thought it was a once in a lifetime thing!”

Two months later, while still searching for a job, Burgess volunteered to help a local student struggling with his Shakespeare assignments. Little did she know that this tutoring experience at the Robinson Community Learning Center (RCLC) would later land her a job working with youth in RCLC’s afterschool programs.

Burgess, now RCLC’s performing arts associate program director, describes the children she met during her first weeks on the job: “I knew almost immediately that they had what it takes to do incredible things on the stage.”

Part of the philosophy at RCLC is to teach youth how to take positive risks in a safe environment. For many kids and adults alike, performing onstage is intimidating. Most people consider performing Shakespeare unthinkable.

Burgess says introducing drama literacy to children through Shakespeare implements the organization’s philosophy in a creative way. Early on, the young actors experience “little wins” onstage. “Taking positive risks pays off on the stage, but it also transforms other areas of the children’s lives. It builds confidence,” says Burgess.

At 9 years old, Paul Ferguson participated in the first session of summer Shakespeare camp at RCLC in 2008.  To encourage Paul and his peers to relax and prepare themselves for the day’s activities, Burgess began each early morning session with yoga instruction, stretching and professional vocal and physical warm-up exercises.

Now with more than four years of acting experience in the Robinson Shakespeare Company (RSC), Ferguson finished as second runner-up and the only freshman to place in his first statewide high school Shakespeare competition in Indianapolis on March 3, 2013. Marian High School junior and fellow RSC actor Christina Camp also participated in the state competition for the first time.

Scott Jackson, program director for Shakespeare at Notre Dame, prepares young actors in partnership with RCLC.  Robinson Shakespeare Company actors have finished in the top three of the state competition each year since 2008.

The high school competition involves the performance of a Shakespeare monologue followed by a sonnet. Although the competition criteria require actors to skillfully demonstrate a full range of emotions, Ferguson prefers serious roles.

“I feel like those [parts] have more meaning because you have to show all the feelings that go along with becoming that character. Anger. Sadness. Even joy. Those are emotions I connect with,” says the young actor.

After playing Hamlet in a Robinson Shakespeare Company performance last year, Ferguson chose a monologue from the same play for last week’s state competition. “I connect with Hamlet. Most people think of [him] as insane. For me, Hamlet is not insane. It’s just that he has so much to deal with and no one understands him.”

When asked why he chose to dedicate more than six months of careful preparation for the March competition, Ferguson says, “I don’t know whether or not I will pursue a career in acting. I just like it a lot.” Ferguson was recently cast in his first professional performance in the Notre Dame Shakespeare Festival's production of Richard III.

Ferguson pauses. “It’s the emotion. You can get rid of those feelings you have but can’t express in your real life. In those times of intense anger during a scene, it is just natural. The anger is released.  It feels awesome! For me, this is a GOOD way to express it.” 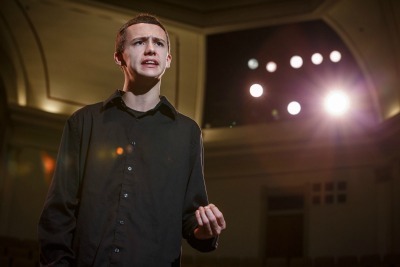 Paul Ferguson finished as second runner-up and the only freshman to place in the statewide high school competition on March 3, 2013. 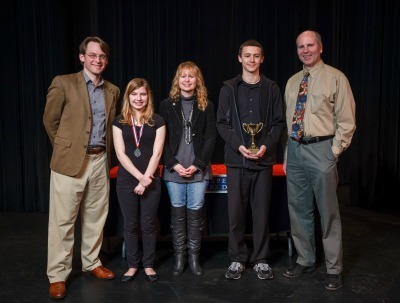