“Congratulations! Today is your day. 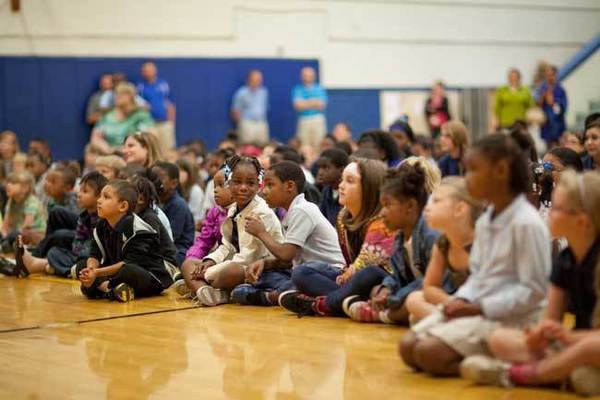 You’re off to Great Places!

You’re off and away!”

SOUTH BEND — Jefferson Intermediate School eighth-graders recently used what they had been learning in the classroom to give advice to Perley Fine Arts Academy students in a fun way.

In a special performance, the 135 eighth-graders presented a play they had written and made sets for based on the Dr. Seuss book, “Oh, the Places You’ll Go!”

The play was inspired by the eighth-grade students’ transition to high school and their reflections on their own concerns when entering middle school, said Christy Burgess, outreach director for the Robinson Shakespeare Company based at the Robinson Learning Center.

Burgess spent the school year working weekly with the Jefferson students in language arts classes integrating drama into the curriculum to teach many things, including state standards. “We’re not just performing plays; we work into grammar lessons or poetry.”

The idea for the performance came from Kate Schwertfeger, the eighth-grade English teacher with whom Burgess co-taught, who wanted a play that included all her students.

“Through the creative process, we asked the students ‘When you came to Jefferson, how did you feel and what advice would you give?’” Burgess said. The students also studied the scheme of Dr. Seuss’ book to get a feel for how to write their script.

The eighth-graders put in advice for fourth-graders going into intermediate school like “not to be afraid of tall kids or to go into sports to make more friends or not to worry about getting lost. They show students a new school is not so scary,” Burgess said, “at the same time they are facing going to new high schools.”

Students worked in small groups an hour per week for seven weeks to create the play and colorful sets. Students could choose whether to take a role on stage or work with the technical aspects of the performance and making the backdrops.

“They wrote it, memorized their lines, created their own actions to go with it, made the sets,” said Schwertfeger. “They learned many skills, first and foremost, building confidence to be on stage. Also, listening and speaking skills, adding expression. They worked really hard.”

The eighth-graders and their teachers walked up Eddy Street to Perley for the big performance. They had performed for the other students at Jefferson the day before as part of a year-end celebration of achievements, including improved ISTEP test scores in every category, said Carmen Williams, Jefferson principal, a big fan of the integrated drama program in its second year.

The eighth-graders were going to perform the play for their parents the following day at their class recognition program.

Although many expressed stage fright before the Perley performance, their teachers were pleased.

“It was wonderful,” Schwertfeger said.

“They were great,” Burgess said. “I feel privileged to be able to work with such wonderful young people. I am really proud of them for being able to perform well and project for the little people at Perley.”

The students seemed to really enjoy the experience.

“It was fun for me. I like to act because it lets me be free,” said eighth-grader Cherish Shabazz. “I am happy we did it for the little kids. They said they liked it. That means I did something good.”

She plans to continue in theater at Clay High School next year.

Jaelyn Powell and Alexa Snyder both had been in drama clubs before and enjoyed working with their classmates.

“It was good for the eighth- grade class to come together for the last time and perform for little kids,” Jaelyn said.

“It was fun to go into the community and perform for other people,” Alexa said. “I like doing stuff like this. It’s been a good opportunity.”

Bill Bradford, eighth-grade reading teacher said, “They did really well and showed so much growth. The Robinson program coached them and gave them confidence. In every class they do activities to get the students to come out of their shell. They may get used to hiding in class, but when the (drama teachers) do activities they have to get up and move and act things out.”

Through a grant from the Community Foundation of St. Joseph County, the Robinson Shakespeare Company, founded in 2008, was able to start an outreach program, said RLC director Jennifer Knapp Beudert. That led to the creation of after-school programs and in-class programs at several schools and agencies.

The program works not only with Jefferson and Perley but also with Muessel Center and Dickinson Fine Arts Intermediate Academy in the South Bend schools.

With in-school and after-school classes, the drama program has an outreach to about 500 students per week in 27 different sessions, Burgess said. Performances have been seen by more than 6,000 audience members this school year.