As part of a new plan for South Bend’s Northeast Neighborhood, a major mixed-income, single-family residential housing development is planned for a 13.4-acre site north of State Road 23, south of Eddy Street Commons and east of Eddy Street. 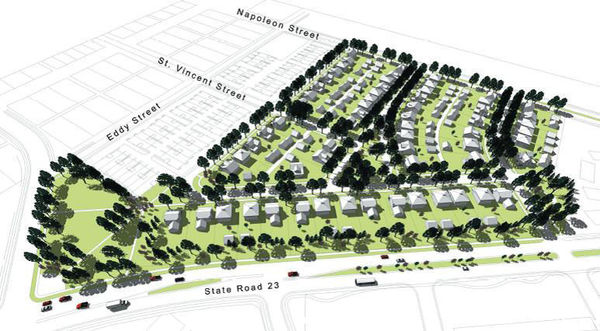 The objective is to create a seamless mix of 53 market-rate and affordable 2,400 to 1,100-square-foot homes in an attractive, safe, pedestrian-friendly neighborhood with strong links to the surrounding area.

The redevelopment plan is a project of the Northeast Neighborhood Revitalization Organization (NNRO), a local not-for-profit dedicated to the social, physical and economic revitalization of the city’s near north side.

“We started the groundwork for this plan five years ago,” says Tim Sexton, associate vice president for public affairs at the University of Notre Dame and current NNRO board president.

“We are thrilled that the collaborative end result of this ‘Triangle’ Housing Redevelopment Plan will include a mix of 53 new market-value (70 percent) and affordable (30 percent) homes. It is transformational, but the plan intentionally builds on the assets of the existing neighborhood,” says Sexton.

Neighborhood resident and NNRO board member Marguerite Taylor, says “The vision for my neighborhood is coming to fruition—an area you can walk or bike, with places to eat and shop, dog-walkers and where you know your next-door neighbor’s name.”

NNRO leaders knew that maintaining the racial and socioeconomic diversity of the neighborhood was vital to the project’s success. Community revitalization without displacement is part of the South Bend Heritage Foundation’s (SBHF) mission and philosophy. In addition, the organization’s affordable housing expertise has made SBHF a natural partner in the Triangle project.

Current owner-occupants in this area have worked with NNRO and with South Bend Heritage to either receive relocation benefit assistance to find new housing opportunities in the neighborhood or have applied for a new “triangle” home.

Marguerite Taylor says, “Every single person who moved from the triangle to another location is better off today than when they were living on Burns, Georgianna or Duey Street. And, I mean everyone. The job of the resident members of the NNRO is to see that people are treated fairly and that the neighborhood is not gentrified. We take that charge seriously.”

The NNRO’s collaborative groundwork for the project has relied on strong existing partnerships with both the City of South Bend and the University of Notre Dame. The city has committed between $500,000 and $1 million in local funds to launch the initiative.

Necessary infrastructure improvements and rerouting of SR 23 are scheduled to begin in April 2012. The future estimated value of neighborhood investments will exceed $12 million. Residents will begin moving into the new homes by the spring of 2013.