Few Americans realize that a Catholic sister helped to found Alcoholics Anonymous, or that another played a key role in developing the Mayo Clinic. Women religious seldom sought recognition for their contributions. 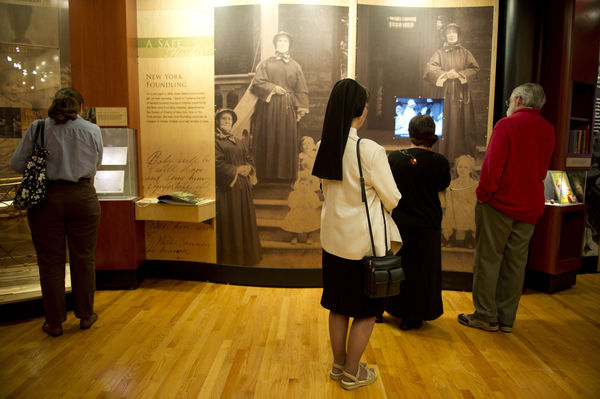 That's where Kathleen Sprows Cummings, associate professor of American Studies and associate director of the Cushwa Center for the Study of American Catholicism, University of Notre Dame, enters the scene.

Cummings knew of Women & Spirit through her work with other historians of American women religious, and in summer 2009 her colleague M. Catherine Hilkert, O.P., in Notre Dame’s Department of Theology, suggested that she try to bring the exhibit to South Bend.

Cummings agreed enthusiastically, and once she actually viewed it later that fall at the Dallas Women’s Museum, she was convinced that South Bend should host it.

“Seeing this exhibit will help people move beyond popular stereotypes of American sisters,” says Cummings. “Many people don’t realize that women religious have played a huge role in shaping the history and culture of this country.”

More than 600 sisters from twenty-one different religious communities nursed both Union and Confederate soldiers during the Civil War, and American Catholic sisters established over 110 U.S. colleges and universities. In many cases, sisters were encouraged to work anonymously and other church administrators took credit for their work.

Cummings was unable to find a space on Notre Dame’s campus large enough to mount the 4,200-square-foot exhibition, and contacted the Center for History.

“The Center for History brings installation and curatorial expertise that I just don’t have,” says Cummings, “For the Center for History, it was both an opportunity to host an exhibit that has been shown in the Smithsonian and a chance to build partnerships between Notre Dame and Saint Mary’s.”

Ray commends Cummings for working tirelessly to promote the exhibit in the region and on Notre Dame’s campus. Cummings deflects the praise, citing her gratitude to Notre Dame’s Office of the President for providing the majority of the funding necessary to bring the exhibit to South Bend.

“The Cushwa Center, The Alumni Association, the DeBartolo Performing Arts Center and the Institute for Latino Studies are just a few of the campus units that have offered support or agreed to sponsor events,” says Cummings.

The self-guided exhibit will be on display at the Center for History (808 West Washington, South Bend) through December 31. Other small exhibits, featuring information and photographs about the history of women’s religious life, can be viewed on campus in the Hesburgh Library Concourse, the Eck Visitors’ Center and Carole Sandner Hall.

For more information about the exhibit itself and upcoming films, speakers and discussion on campus and in the community, visit centerforhistory.org and womenandspirit.org. 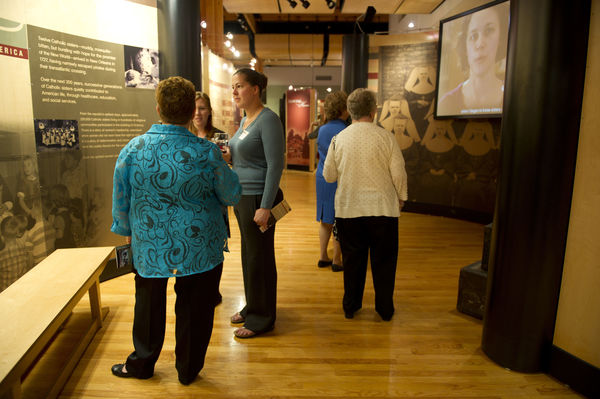