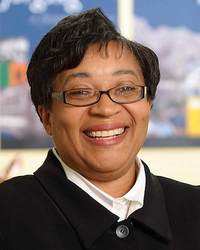 As Associate Director of Community Relations for the University of Notre Dame, Jacquelyn focuses on cultivating the University’s relationships with local and regional communities. In her role, she helped establish Notre Dame Downtown. Notre Dame Downtown later transitioned into the Notre Dame Center for Arts and Culture, which in addition to the Office of Community Relations, houses multiple community outreach initiatives that focus on arts and culture.  Jacquelyn was instrumental in gaining community support for the closing of Juniper Road, a project that allows for continued campus growth without encroaching on the neighboring communities. She also helped facilitate the establishment of Eddy Street Commons.

Jacquelyn returned to the University, from which she graduated, after working as corporate diversity manager for Memorial Health System. While at Memorial Health System, she launched a number of initiatives, including diversity training for employees, policies to promote a diverse workforce and community, national and regional relationships to foster a culture that embraces diversity.  Her resume includes experience as a human resource administrator in the aerospace division of Allied-Signal and as a sales representative for Phillip Morris USA.

Jacquelyn serves on a variety of boards and committees in the community, including The Salvation Army and Rebuilding Together; serving as past president for both organizations. She also served on the board of the Black Alumni of Notre Dame and was a founding member of the Frazier Thompson and Charles Martin Scholarship funds.  In 2009, she was a Tribute to Women Woman of the Year recipient and in 2010, Jacquelyn was inducted into the Pi Lambda Theta International Honor Society for Educators.